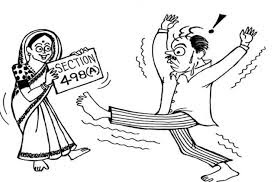 According to the National Crime Records Bureau, only 1,13,403 cases were registered in the country during 2015 under Section 498A. That is a mere 0.1 per cent of the women who have faced marital violence. Of the 1.13 lakh cases filed under the Section in 2015, 90 per cent were charge-sheeted while only 3,314 cases fell through for being ‘mistake of fact or of law’.
The section 498A of IPC is being misused to prevent it the Supreme Court issued new set of directions. A two Judge Bench of Justices AK Goel and UU Lalit observed that Section 498A was inserted in the statute with the laudable object of punishing cruelty at the hands of husband or his relatives against a wife particularly when such cruelty had potential to result in suicide or murder of a woman.

“It is a matter of serious concern that large number of cases continue to be filed under Section 498A alleging harassment of married women. To remedy the situation, we are of the view that involvement of civil society in the aid of administration of justice can be one of the steps, apart from the investigating officers and the concerned trial courts being sensitized. It is also necessary to facilitate closure of proceedings where a genuine settlement has been reached instead of parties being required to move High Court only for that purpose,” it had then observed.

A larger bench has decided to re-consider these directions.

The Supreme Court noticed that most of such complaints were filed in the heat of the moment over trivial issues. Many of such complaints are not bonafide. This results in harassment of family members and may “hamper any possible reconciliation and reunion of a couple”.

In this backdrop, the court has issued directives to prevent the misuse.

1. All the state governments will instruct the police officers not to arrest automatically when any case under section 498-A of IPC is registered. They will make sure that such arrest must satisfy the provisions laid down under section 41 of Civil Procedure Code.

2. All the police officers will be provided with check list containing specified sub-clauses under section 41(1)(b)(ii).

3. The police officer shall forward the check list along with the reasons and materials which necessitated such arrest, while producing the accused before the Magistrate for any further detention.

4. The Magistrate while authorizing detention of the accused shall examine the report furnished by the police officer and only after being satisfied will authorize further detention.

5. If the police officer decides not to arrest any accused, then such decision should be forwarded to the Magistrate in writing along with the reasons behind such decision within two weeks from the date of the institution of such case. A copy of it shall be forwarded to the Magistrate which may be extended by the Superintendent of police of the district.

6. Notice to appear in terms of Section 41-A of CrPC shall be served to the accused within two weeks of the institution of the case which may be extended by the superintendent of police of the district for the reasons to be recorded in writing.

7. If the police officer fails to comply with the aforesaid directions, then they will be liable for departmental actions and shall also be liable for to be punished for Contempt of Court. Such cases should be instituted before the High Court having territorial jurisdiction.

8. If a Judicial Magistrate authorizes detention without recording the reasons as aforesaid, then he shall be liable for departmental action by the appropriate High Court.

9. The aforesaid directions shall not only apply to cases under section 498-A of Indian Penal Code,1860 and section 4 of the Dowry Prohibition Act,1961 but also in such cases where offence is punishable with punishment for a term which may be less than seven years or which may extend to seven years, whether with or without fine.

10. A copy of this judgment shall be forwarded to the Chief Secretaries as also the Director Generals of Police of all state governments and the Union Territories and the Registrar General Of all High Courts for onward transmission and ensuring its compliance.

Some judgments have laid down procedural safeguards to prevent any possible misuse of Section 498A. For instance, in Arnesh Kumar versus State of Bihar (2014) 8 SCC 273, the Supreme Court and Lalita Kumari versus State of Uttar Pradesh (2014) 2 SCC 1 the Court restrained police from making automatic arrests until they were satisfied after conducting preliminary enquiry before registering an FIR . The police were directed to call the parties, talk to both, ascertain as to the genuineness of the complaint and then proceed. The police were also directed not to arrest aged in-laws. This process is, with my limited knowledge, followed by most Police Stations.

The guidelines of the Supreme Court in Rajesh Sharma and others vs. State of Uttar Pradesh and another in cases relating to complaints U/S 498A of the Code of Criminal Procedure has baffled the entire nation. The Supreme Court while hearing a Special Leave Petition (SLP) in Rajesh Sharma vs. State of UP 2017 has provided safeguards against alleged misuse of Section 498-A of the Indian Penal Code (IPC). In Rajesh Sharma case, the main issue brought up before the court was whether it was a mandate to roping in all family members to settle a matrimonial dispute and cruelty under section 498A. The court states that if complaints are filed under this legal provision, it would not just be harassment against the innocent husband and his relatives, it would also mean that reconciliation and reunion of the couple wouldn’t be possible if such a complaint is filed.

Few critics appear to be dissatisfied over the language of the Bench, yet one thing is crystal clear that the apex court has tried to strike a balance between the right of the victim and right of the accused.

The ground realities which have not been reflected in any study could be the reason for such misguided guidelines. The misuse of Section 498A is admittedly rampant, but forms a miniscule percentage when opposed to actual and genuine cases filed. The genuine cases are horrid tales. Horrid tales of not what the harassed women endure in their marital homes. Horrid tales of what the women encounter just to register an F.I.R.

As the shuttling of the woman between the Commissioner’s office and the final destination police station is complete, the F.I.R. is registered with great reluctance in local language , complaint is altered to suit the convenience of the police and can not be comprehended by her. The witness statements are generally deliberately and intentionally recorded incorrectly to give it a look of a third person narration of events rather than an actual account of the happenings. So the victim’s case before the Magistrate is weakened. The torrid times just begun.

With difficulty when the case reaches the court the doomed woman has a faint ray of hope, to find justice. In meantime husband and his family gets time to secure bails for themselves. The victim is placed in the hands of a Public Prosecutor of the Court before which her matter is to be heard. Generally ,the Public Prosecutor doesn’t really understand the case beyond what is in the file before him and treats her with disdain. The victim is present in the Court on every hearing, treated poorly by the Court peon, the Public Prosecutor and at times even the Magistrate. The husband and Co. on the other hand are never in the Court. Their Advocate files exemption applications for them, which are allowed generously by the Magistrates, exempting them from their appearance in the Court. Therefore the victim is punished by putting her through the ordeal of the police station outings, innumerable Court hearings, no justice anywhere in sight even after 2 years with the case chugging along aimlessly.

The guidelines dictated by the Supreme Court in Rajesh Sharma and others vs. State of Uttar Pradesh and another direct the lower Courts to exempt the Accused from appearing in person and allow him video conferencing facility. There already existed the luxury of the ever so generous exemption applications and now the husband can contest the matter from the comfortable confines of his home and sofa that his wife was made to buy before entering the matrimonial home.

The victim is alone, all through this entire trauma. The Accused has his lawyer to defend him and bully the victim in the Court. The Victim is left to fend for herself as the Public Prosecutor is indifferent, the Magistrate wants one less matter, one disposal to his set target and as a result the Victim is pressurized into exploring the possibility of a settlement through mediation. Money is offered as alimony in exchange for proceedings to be dropped against the accused. Both the Magistrate and the Mediator take it upon themselves to explain to the victim that she must consider her whole life ahead and not focus on the case. That she could get remarried and start a fresh life.

When the victim expresses no interest towards monetary compensation and expects justice, she is lectured that putting him behind bars is not going to solve her problem. Where would she live? What would she do for a living?

The victim is also warned that she may not succeed in her case and the husband may go scot free. The victim is sometimes forced to withdraw her complaint, made to file a quashing petition before the High Court and coerced into living with her husband again, probably in the hope that there would be no second innings of harassment. Viewed from any angle, it’s an innings defeat for the victim.

The Victim wonders and asks very pertinent questions. What are the courts for? Are not the laws and the Penal Provisions meant for punishing the guilty? Why the over eagerness to settle disputes instead of conducting trials?

To enforce upon parties the mediation route in Criminal Cases even when they do not want to, is travesty of justice.

Cases that do proceed and come to a probable conclusion, possibly acquitting the accused for want of evidence, do not find their way into the Appellate Court. The victim is left exhausted after several years of hopeless hope and is dependent on the State to find her justice which again, is too much to ask.

The need of the hour is to have separate Courts for such cases from other criminal cases.
If the cases are determined within three to six months, neither the complainant nor the accused would be harassed or affected by the case. It is the inordinate delay that creates the problem. Accused husbands are infamous for ridiculing their wives when the matter is pending in Court. Statistics reflect only 2% conviction and that they would be acquitted.