In a country where 30 million people suffer from cardiovascular problems and over two million die of heart attacks and strokes each year, stents have become essential. Every year, over 200,000 heart surgeries take place in the country. But this demand has stoked a racket of extraordinary proportions. 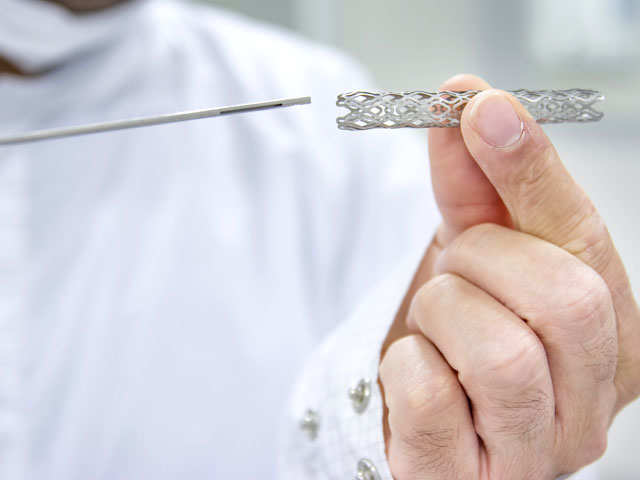 The episode of capping the stent price started in 2014 when Lawyer Birender Sangwan’s friend’s brother had a heart attack and was charged Rs 126,000 for a stent in a private hospital in Faridabad. The box that carried the stent had no maximum retail price on it. We checked with other doctors and they told us it was because stent prices weren’t regulated by the government, so hospitals had a free hand in fixing rates.
“The total bill at the hospital was more than Rs3.2 lakh,” Sangwan said. “That is really expensive for a country like India.”
Soon, he filed a query under the Right to Information Act to find out the number of hospitals in Delhi that performed angioplasty. He found 54 such hospitals and the rates of stents varied across the facilities.
A month later, bothered by what he calls doctors’ brutality, Sangwan filed a complaint with India’s health ministry. In November 2014, Sangwan filed another RTI to see if stents came under the drugs category or metal category.
The government responded in December, informing him that stents came under the Drug and Cosmetic Act, but weren’t covered under the National List of Essential Medicines (NLEM). This list identifies medicines that must be made affordable for citizens. So, in February 2015, he filed a PIL at the Delhi high court (HC) to get stents included in NLEM. The court asked India’s chemical and fertiliser ministry—which oversees the department of pharmaceuticals—to take action.
There was no response for months. In October 2015, Sangwan filed a contempt notice at the HC citing the government’s laxity.
It was only in July 2016 that the Narendra Modi government notified the addition of stents in the NLEM. Sangwan wasn’t done, though. In December, he filed another PIL seeking a limit on the maximum retail price of stents. This was followed by a HC order asking the government to fix the rates. Finally, on Feb. 13, the government placed the cap.
“Our fight isn’t against the stent makers,” said Sangwan, “It is against the distributors and hospitals who have been extorting patients.”

Finally on Feb. 13, the National Pharmaceutical Pricing Authority (NPPA), the primary agency for fixing drug prices, notified a price cap of Rs. 7,260 for bare metal stents (those without any coatings) and Rs. 29,600 for modern drug eluting stents. The latter have a polymer coating, which gradually releases a drug to ensure that the blockage doesn’t reoccur.
So far, the average retail price for a bare metal stent was Rs45,000 ($671), while drug eluting stents were priced at around Rs1.20 lakh ($1790).
In a five-page order, the drug pricing authority explained that the move was made after an analysis of pricing data and extensive consultations.

During deliberations, it was found that huge unethical markups are charged at each stage in the supply chain of coronary stents, resulting in irrational, restrictive, and exorbitant prices in a failed market system driven by information asymmetry between the patient and doctors, pushing patients to financial misery; and whereas under such extraordinary circumstances, there is an urgent necessity, in public interest, to fix the ceiling price of coronary stents to bring respite to patients.

Effect on the industry

While the intent is to cap prices in patient interest, this pricing has the potential to block innovations and limit access to world-class medical care and options to deserving patients. The singular focus on controlling ceiling price of stents, without attempting to address the larger picture and correct inefficiencies in the healthcare ecosystem will not achieve its stated benefit, in the long run.
The decision also disregards the evolution of coronary stents over the last four decades, and blocking innovation may set our healthcare sector back by at least a decade, when there were far lesser options for Indian patients. There is a clear, measurable difference between different types of stents and their benefits. The government should have taken this categorization into consideration before regulating prices.

In the days immediately following the NPPA order, reports suggested that Abbott’s bioresorbable stents (which fully dissolves over time), previously priced at Rs1.6 lakh, were withdrawn from a number of Mumbai hospitals. In Kolkata, too, high-end stents suddenly went out of circulation.
The company, however, denied that anything of that sort happened. “Abbott continues to market our full range of coronary stents available in India, per the NPPA order of Feb. 13, 2017,” a spokesperson said. “We have also advised trade partners and hospital partners to abide by the ceiling prices determined by the NPPA order.”
Some part of the setback for multinational stent manufacturers is of their own making, though.